Age Concern Crosby has released details of the next Flick and Friends, over 60’s film, for September.

The film is Mrs Lowry & Son starring Timothy Spall and Vanessa Redgrave. This is a biography of artist L.S. Lowry who lived all his life with his over-bearing mother Elizabeth. 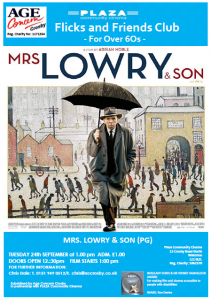 Bed-ridden and bitter, Elizabeth actively tried to dissuade her bachelor son from pursuing his artistic ambitions, whilst never failing to voice her opinion at what a disappointment he was to her.

The film is being shown at the Plaza Community Cinema, on Crosby Road North, Waterloo, Tuesday 24th September.

“It is just £1.00 to see this excellent film. Why not bring a friend?” says Age Concern Crosby.

Make a note of future dates for Flicks and Friends: