Sefton Council is preparing to launch this year’s 30 Days of Sefton in Mind campaign and is calling upon community groups, individuals and organisations in Sefton to get in touch and share stories about where and when they spend their time to find friendship and support.

Now in its third year, 30 Days of Sefton in Mind uses the 30 days that fall between World Suicide Prevention Day (10 September) and World Mental Health Day (10 October) to promote positive mental health across the borough and signpost residents to the many services available to them.

Sefton’s Year of Friendship will link in closely with this year’s theme for 30 Days of Sefton in Mind which will look to promote supportive communities and help people make new friends. 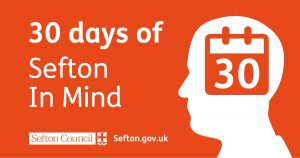 This could be a 5-a-side football team, an LGBT support group or a gardening club. The council wants to hear about any sports teams, coffee mornings, support groups and other activities that help bring people in Sefton together.

To get involved in this year’s campaign tell the council about your experience or groups and tweet it along with a photograph to @SeftonCouncil using the hashtag #30DaysofSeftonInMind or alternatively email communications@sefton.gov.uk by Friday, 30 August.  Tell us about the group/activity, where and when it happens, how it helps and how to access it.

Cllr Ian Moncur, Sefton Council’s Cabinet Member for Health and Wellbeing, said: “The 30 Days of Sefton in Mind campaign continues to go from strength to strength and is an invaluable way for us to promote positive mental health in Sefton.

“Loneliness and social isolation is known to have a detrimental effect on mental health so by promoting groups and activities that bring Sefton residents together we hope that we can help people make new friends and feel less lonely especially during the Year of Friendship.”

Last year, the campaign celebrated the places in Sefton people went to promote their mental health. Submissions from residents were used to create Sefton’s Positive Mental Health Map that can be viewed online at www.mysefton.co.uk/PositiveMentalHealthMap