Age Concern Crosby is pleased to kick off its Flicks and Friends programme for 2019 at Plaza Community Cinema with the newly-released ‘Stan and Ollie’ for next Tuesday (15th).

Synopsis:  Laurel & Hardy, the world’s favourite comedy double act, set out on a variety hall tour of Britain in 1953. Diminished by age and with their golden era as the kings of Hollywood comedy now behind them, they face an uncertain future. As they set out, crisscrossing the country, attendances are disappointingly low. 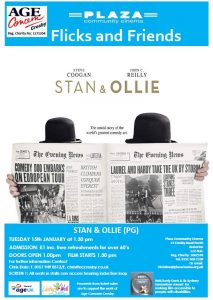 The tour becomes a hit, but Laurel & Hardy can’t quite shake the spectre of Stan and Ollie’s past and long buried ghosts, coupled with Oliver’s failing health, start to threaten their precious partnership. A portrait of the most tender and poignant of creative marriages begins to unfold as the duo, aware that they may be approaching their swan song, try to rediscover just how much they mean to each other.

The screenings, aimed at those aged over 60, have become so popular that people are advised to arrive at the cinema for no later than 12.30pm to secure a seat ready for the film to start at 1pm.

It costs £1 for entry and this includes tea/coffee and biscuits.

There is no need to book,  tell your friends and bring them with you!