An organisation which works on behalf of the local community in Sefton has been formally recognised for its contribution to the NHS. Sefton Council for Voluntary Service (CVS) has been awarded the NHS 70 community partner of the year award, as voted for by staff of NHS South Sefton Clinical Commissioning Group (CCG) and NHS Southport and Formby CCG.

Sefton CVS is an independent charity which aims to ‘support independent, resilient and sustainable communities’ by promoting and assisting the work of voluntary, community and faith (VCF) groups. One of the charity’s objectives is to promote the advancement of health with Sefton. This has seen Sefton CVS link up with a variety of organisations including Alzheimer’s Society, Healthwatch Sefton, Sefton Council, as well as NHS South Sefton CCG and NHS Southport and Formby CCG.

Some of the highlights from the work Sefton CVS has done with the NHS in Sefton include the Strand by Me community signposting and health shop in the Strand, the creation of an online directory for over 3,500 services delivered by more than 1,000 VCF groups in Sefton and the Sefton Emotional Achievement Service which delivered self-harm prevention and support for 11-25 year olds.

It is the first time the CCGs have chosen to recognise a community partner of the year award and it was voted for by members of staff at the CCGs as part of their annual staff awards. The award is part of a year-long celebration of the NHS 70th anniversary which will include national celebrations at Westminster Abbey and York Minster on the 5th July. 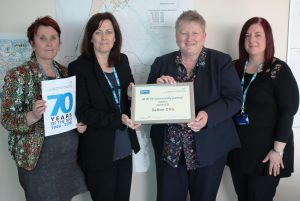 Speaking about the award, chief executive of the CCGs, Fiona Taylor, said: “Sefton CVS is an incredibly important partner for us in terms of working with the local community. The NHS is increasingly looking to community groups to make sure the health services we commission are joined up with other services and deliver the most benefit for local people and the team at Sefton CVS is an invaluable part of that. I am delighted that our staff have chosen to formally recognise its work through this award.”

Sefton CVS chief executive, Angela White OBE, said: “We are delighted to be presented with this award, which is made all the more special because votes have come from staff and colleagues at NHS South Sefton CCG and NHS Southport & Formby CCG”.

“This award is a testament to the strong local partnerships that exist within our borough and I would like to thank our colleagues at both CCGs for nominating Sefton CVS.”

The CCGs have also asked the three Sefton MPs to submit a formal nomination for Sefton CVS to the NHS 70 Parliamentary Awards. Winners will be announced at a special ceremony which takes place in Westminster on the 4th July.