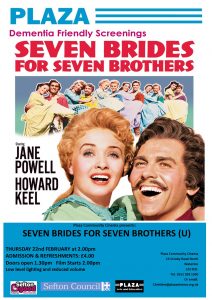 Directed by Stanley Donen it was released in September 1954.

STORYLINE:  During the 1850s, Milly (Jane Powell), a pretty young cook, marries Adam (Howard Keel), a grizzled woodsman, after a brief courtship. When the two return to Adam’s farm, Milly is shocked to meet his six ill-mannered brothers, all of whom live in his cabin. She promptly begins teaching the brothers proper behaviour, and most importantly, how to court a woman. But after the brothers kidnap six local girls during a town barn-raising, a group of indignant villagers try to track them down.